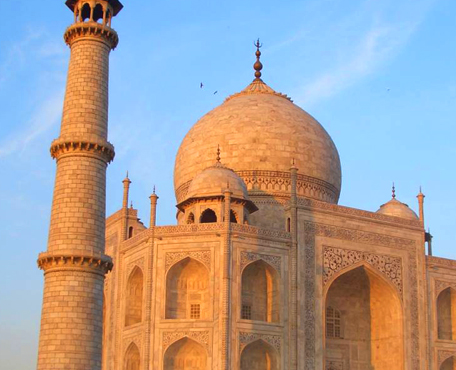 05:15 Hrs: Start the tour
Early morning, you will be picked up by our chauffer from the hotel. He will transfer you to the Delhi Railway station to board the superfast air conditioned Shatabdi Express to Agra. Your breakfast will be onboard train.

08:15 Hrs: Agra
On reaching Agra, our executive will warm welcome you at the railway station. He will then transfer you to the hotel, check in the hotel. Relax for some time and meet with your tour guide.

09:15 Hrs: Visit the Taj Mahal
With your tour guide, visit the awesome creativity The Taj Mahal. It is the pride for India and is one of UNESCO world heritage site. It was built by Emperor Shahjahan. Taj Mahal is designed with the white marbles, which shines and looks stunning. It shows the creativity and art of ancient India.

11:30 Hrs: Agra Fort
Later, visit Agra Fort, it is also a UNESCO World Heritage site located in Agra, Uttar Pradesh. Construction of the massive red-sandstone fort, on the bank of the Yamuna River, was begun by Emperor Akbar in 1565. It is near the gardens of the Taj Mahal stands the important 16th-century Mughal monument known as the Red Fort of Agra. In this fort there are many more visionary palaces, such as the Jahangir Palace and the Khas Mahal.

12:45 Hrs: Lunch
Get back to the hotel for lip smacking lunch. You will be served with ultimate food prepared by famous chefs.

14:30 Hrs: Fatehpur Sikri
Later, with your tour guide, visit Fatehpur Sikri, also known as the “Ghost City”. Fatehpur Sikri or 'the City of Victory' is a fortified city in Agra, Uttar Pradesh. It was founded in 1569 by the Great Emperor of the Mughal dynasty Akbar. The structures in the city have been designed following the styles of Hindu, Jain and Islamic architecture, using red sandstone, which is also called as 'Sikri sandstone'.

19:30 Hrs: Return Delhi
Now, you will reach Delhi with plenty of happy moments and ultimate enjoyment. Our chauffer will drop you to the hotel.

19:30 Hrs: Return Delhi
Now, you will reach Delhi with plenty of happy moments and ultimate enjoyment. Our chauffer will drop you to the hotel. Here ends the Same Day Agra Tour by Train.