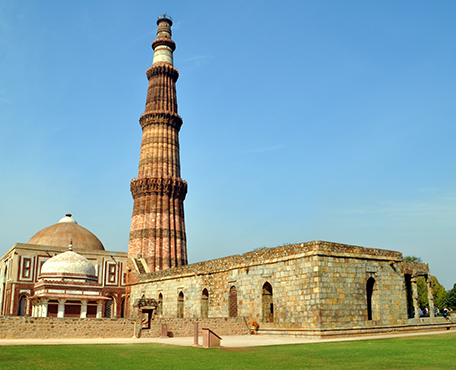 Raj Ghat – Rajghat is only 4 kilometres away from Janpath in New Delhi. Rajghat at Delhi is adjacent to Feroz Shah and Delhi Gate on the Ring Road from where you can view the Yamuna River. It is a memorial where the Father of Nation, “Mahatma Gandhi” was cremated on 31 January, 1948.

Jama Masjid – Built between 1644 and 1658, it is one of the last architectural works of the Mughal emperor Shah Jahan. Emperor Shah Jahan, who also built the Taj Mahal, commissioned this mosque in 1644. It remains the largest mosque in India. It is built in typical Mughal style, Jama Masjid, is a wonderful specimen of Mughal love for architecture. The Jama Masjid stands across the road in front of the Red Fort.

New Delhi:
Your New Delhi sightseeing will include following spots and places:

Humayun's Tomb –
After Humayun’s death in 1556, his widow Hamida Banu Begam, commenced the construction of the tomb in 1569. It is the first distinct example of proper Mughal style, which was inspired by Persian architecture. Mirak Mirza Ghiyath, a Persian, was the architect employed by Hamida Banu Begam for this tomb. The tomb proper stands in the centre of a square garden, divided into four main parterres by causeways (charbagh), in the centre of which ran shallow water-channels.

Qutab Minar – Qutub Minar is one of the historical places in India which is located at 15 km in south direction from New Delhi. It is one of the tallest minarets in India and it is made from red sandstone and marbles. Qutub Minar is a 72 meters high minaret located at Mehrauli in south Delhi, India. Commissioned by Qutub-ud-din Aibak in 1193 and completed by his son-in-law Iltutmish, it is a perfect example of Indo-Islamic architecture. In New Delhi, there are many more buildings and monuments to be visited during your Delhi tour. You can also visit Red Fort, Rajpath, India Gate, Parliament House, the Rashtrapati Bhawan and Birla Temple.